Virtual reality, a tool for our mental health in times of pandemic

Isolated, stressed, far from our work and social environment … our daily lives have been radically transformed since the arrival of the pandemic. The consequences of this unprecedented situation for our mental health are becoming more evident every day. What if virtual reality could help us restore the lost psychological and emotional balance?

Mental health, another victim of the pandemic

Anxiety, sadness, irritability, apathy, insomnia, negative thoughts, physical and mental exhaustion… The pandemic is undoubtedly taking its toll on our mental health. Numerous international reports * are raising the alarm: more and more people are experiencing symptoms linked to depressive symptoms or that could be related to post-traumatic stress, a behavioral disorder that usually occurs when someone has been the victim or direct witness of a highly traumatic event in which your life or that of other people has been at stake.
An international study recently published in the “Journal of Clinical Psychology” concludes that, during the first wave of the pandemic, seven out of ten people surveyed (68.5%) experienced symptoms of post-traumatic stress, one in four of depression (25 %) and a fifth suffered anxiety (19.5%).
In Canada, a survey by the Canadian Mental Health Association Canadian Mental Health Association (CMHA) states that 40 percent of Canadians believe that their mental health has deteriorated since March 2020. One in ten even claim to have had suicidal thoughts.

Remedies with side effects

Uncertainty about the future, social isolation and economic difficulties resulting from confinement, as well as the numerous restrictions imposed in almost all countries, have caused psychological havoc in all sectors of society.

Coping with some serenity to situations as complex and unknown as that caused by this global pandemic is not easy and in many countries there has been a clear increase in the use of anxiolytics. Thus, in France the prescriptions of this type of medicine shot up by 5% during the first confinement (March-May 2020). The demand for sleeping pills also increased, although to a lesser extent, according to the French public health agency, Santé Publique France.

In Spain, according to data from the third analysis * Cofares Trends, from March to November 2020, the demand for drugs considered antidepressants increased by + 4.8% compared to the same period in 2019. Although if we analyze what has happened in the period From September to November (coinciding with the second wave), the increase in antidepressants is close to + 6% compared to 2019.

Drug and alcohol use has also increased in some countries. In Canada, for example, one in five Canadians claims to have used some type of licit or illicit substance (alcohol, drugs or psychotropic medications) to better cope with confinement. In the United Kingdom, social services dedicated to the fight against addictions found an increase in demand of around 20 percent in April this year compared to the same period of the previous year.

Pamela Roberts, psychotherapist and director of the addiction program at Priory Hospital Woking, a center specializing in the treatment of behavioral disorders, stated in an interview recently published by the Financial Times: “Covid has contributed to an acceleration of dependencies (… ) Social isolation, loss of control over the situation we find ourselves in, working from home, or not being able to connect with support networks or structures, are factors that have favored an increase in alcohol consumption. “

Evade us in another way

Faced with a highly stressful situation like the one we have experienced, escape valves are undoubtedly more necessary than ever, but the few social activities allowed during confinement have drastically reduced the traditional leisure possibilities. And this is where Virtual Reality comes into play and opens new doors of escape for us.
Due to its interactive nature, VR allows us to get closer and actively participate in another form of entertainment where we are no longer mere spectators of that music concert or that dance show. Thanks to the advances of this innovative technology, we can now live a unique immersive experience within 3D scenarios where we are able to move and interact thanks to our own avatar.

An example of this type of project is that of the company The Wave XR, which has managed to transfer concerts by artists such as the violinist Lindsey Stirling or the recent concert by Travis Scott to the virtual environment through the video game Fornite.

Eclox offers a range of specially adapted content that will allow its users to live new experiences or virtually relive memories of the past from the comfort of their homes or residences for the elderly. Going back to strolling the streets of our favorite city or discovering a place we always wanted to visit is now possible thanks to the new range of XR helmets that are more ergonomic and easy to use, even for a public unfamiliar with new technologies.

The pandemic has revealed that the elderly are one of the groups that has suffered the most from isolation and lack of contact with the outside world
At Eclox we want to bring this new form of immersive leisure to all audiences, especially the most fragile people in need of escape, social interaction and cognitive stimulation.
The high quality of the immersive experience of our products helps to stimulate the cognitive system and in particular attention and memory in older adults. It is for this reason that virtual reality is increasingly being used as a therapy to mitigate the side effects of dementia and Alzheimer’s in patients who are particularly sensitive to the multisensory stimulation provided by VR technologies. The emotion arising from these experiences manages to go where other therapies cannot reach and although, far from proposing a cure, virtual reality offers new clues to doctors, scientists and therapists in neuropsychological treatment and rehabilitation.

Meditate thanks to Virtual Reality

All the experts in the field affirm it: Virtual Reality technologies are a powerful tool at the service of Health and well-being of people. But how is it possible to achieve that state of satisfaction and physical and emotional balance so desired? For many, meditation is one of the ways to achieve serenity and harmony that allows us to feel good with ourselves and with the world around us.
More and more people are interested in meditation techniques to find relief from the anguish or stress of our daily lives. But meditation is not a simple exercise and requires effort and a certain mental predisposition that is not always available to everyone. In addition, the environment is sometimes not the most favorable (unfortunately, we cannot always go to meditate in that idyllic place that allows us to really relax).
It is here where the virtual reality can provide us with a fundamental help. Comfortable and ergonomic, our VR equipment allows the user to enjoy a total immersive experience through an immersive image and sound in high definition to facilitate a new form of multisensory meditation. Forests, beaches, deserts … all kinds of natural spaces at your fingertips and at any time and place. Meditation thanks to VR acquires a new dimension and all this at the service of your well-being. 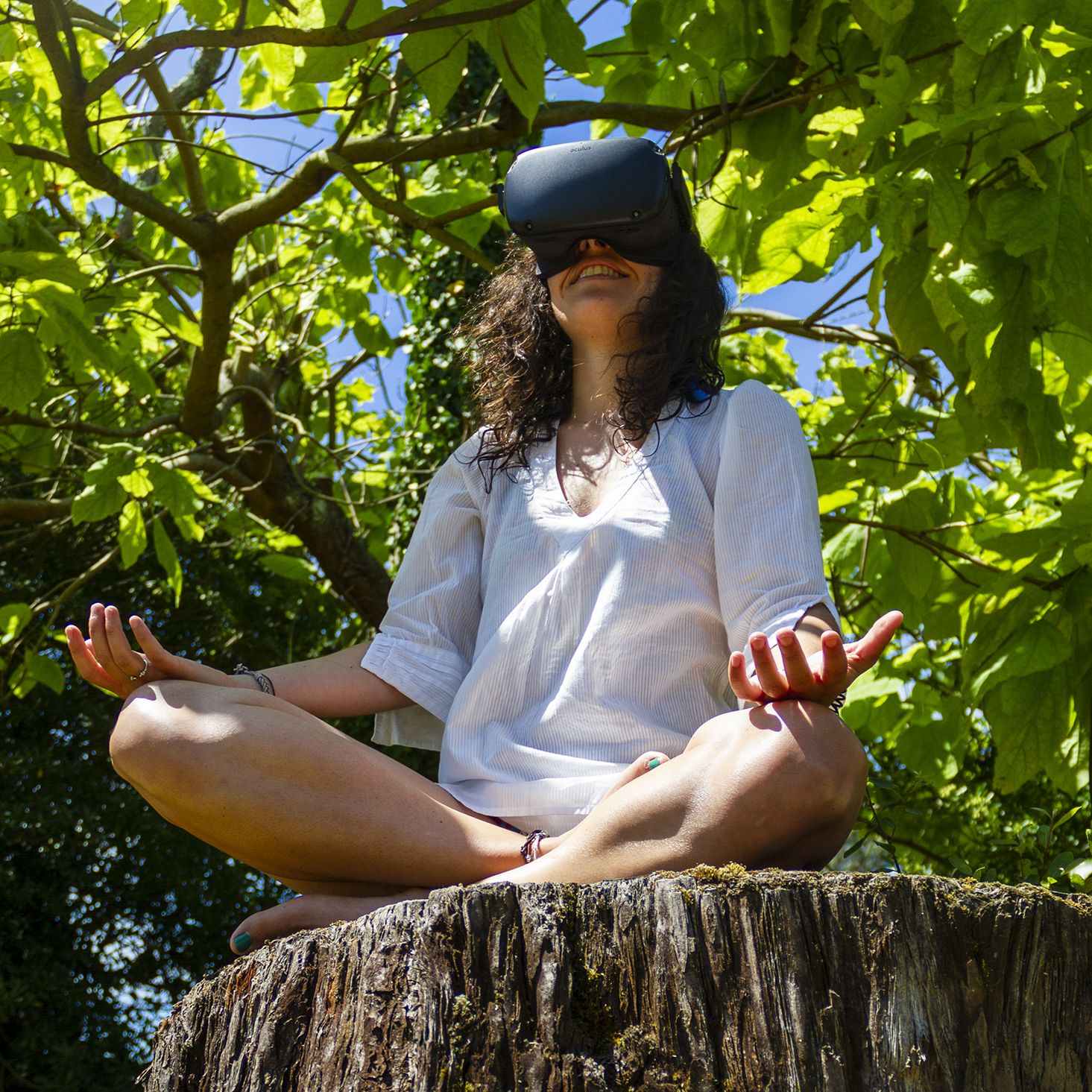 In a social context as complicated as that generated by the pandemic and its consequences, mental health runs the risk of becoming another collateral victim. VR technologies allow us to develop new alternatives to maintain or restore our mental and emotional balance, in order to be able, in short, to continue fully enjoying life.

* As led by Professor of Psychology Gordon J.G. Admundson https://theconversation.com/covid-stress-syndrome-5-ways-the-pandemic-is-affecting-mental-health-147413
* According to a report by the International Committee of the Red Cross https://www.lepoint.fr/sante/covid-19-une-personne-sur-deux-dans-le-monde-a-vu-sa-sante-mentale -alteree-08-10-2020-2395503_40.php, one in two people has seen their mental health altered by the pandemic worldwide